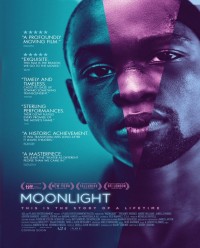 Barry Jenkins’ Moonlight is a subtle, searing and sensitive portrait of a black man growing up in Miami. It follows Chiron in three stages (childhood, adolescence and young adulthood) of his hardscrabble life and has garnered the highest critical praise of any film in 2016, receiving 100% positive reviews from dozens of publications including the Globes of Toronto and Boston, The New Yorker, the NY and LA Times and The Guardian. “Jenkins has made a breathtaking film, one with political urgency and a deep, compassionate humanity. Moonlight is timely and timeless, a study in limits that casts its gaze up toward something transcendent.”—Richard Lawson, Vanity Fair. Nominated for eight Academy Awards, including Best Picture and Best Director, most critically acclaimed and Highly Recommended, Moonlight is the must-see American indie film of the year.