@SamJaneB @speedriverbike We have set a copy aside for you. Thank you!


@SamJaneB @speedriverbike Hi Dr. Brennan, we are actually opening for in store browsing on Monday. This timeline wo… t.co/bw9H3Df300

In Praise of Fanfiction: Reviewing Meddling Kids and The Strange Case of the Alchemist's Daughter 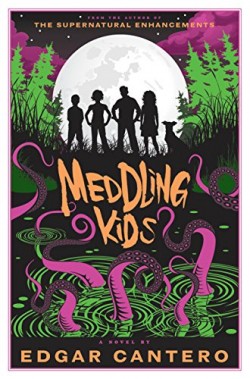 Meddling Kids: A Novel
The Strange Case of the Alchemist's Daughter

Writers are drawn to their craft by the compulsion to write a (yet unwritten) story, one that they would most like to read. The thinking goes that if you take the sum the many wonderful things you've read - including narratives one might perceive as overdone or cliched - that eventually you will stumble upon some lack, a missing piece or an unexplored angle to serve as your launching off point. Perhaps you felt that a particular character was underdeveloped or inadequately represented in a given story. Maybe there were plot threads in need of dusting off and fleshing out or a familiar trope that warranted reimagining in a different time or place.

If this approach sounds derivative, that's because it is. But on close examination, it must be admitted that much of what we describe as culture (the high-, low- or no-brow variety) originated from some very unoriginal ideas. And this isn't a terrible thing.

It does, however, call to mind the dubious concept known as fanfiction, a frequently maligned term conjuring images of obsessive pop culture geeks transplanting their favourite fictional characters into any number of ill-conceived, ill-written scenerios. At its worst, fanfiction can be contrived, silly and of questionable quality (Fifty Shades of Grey, I'm looking at you). At its best, it can blossom into Wide Sargasso Sea (Jean Rhys' masterful exploration of Jane Eyre from the perpective of the attic madwoman) or O Brother Where Art Thou?, the Coen Brothers' whimsical take on Homer's Odyssey.

Two of this summer's most readable offerings fall into this curious category of derivative storytelling: Edgar Cantero's Meddling Kids and The Strange Case of the Alchemist's Daughter by Theodora Goss.

Cantero's title serves as an unsubtle nod to his source material. Stop me if you've heard this one before: a group of snoopy teenagers get to the bottom of a mystery on a creepy island, complete with a spooky old house. Oh, and an abandoned mine. And a shifty dude in a hokey costume. Jinkies!

Meddling Kids takes a well-loved cast of characters and imagines them as young adults still haunted by a case, solved but unresolved. The sleuthing club is tragically down by one - charasmatic leader Peter - and Scoobydooian comparisons are soon eclipsed by a darker tale in which the players must confront demons of the personal and supernatural variety: mental illness, grief, romantic yearnings and - like, zoinks! - interdimensional Cthulu-like monsters! A highly recommended caper, best paired with a road trip, an animal companion and surplus snacks...

Theodora Goss' The Strange Case of the Alchemist's Daughter takes us into even more familiar territory: the literary world of Victorian England. Strange Case offers us a veritable who's who of mad science - Frankenstein, Moreau and Jekyll all get their due - but here these famous stories are told from the unique perspective of the devious doctors' various female offspring.

Following her mother's death, Mary Jekyll discovers mysterious documents suggesting that her father may have been (spoiler alert!) leading a double life. That's not even the worst of it: Dr. Jekyll's secret self is being implicated in a series of Ripper-style murders. Intrigued, Mary seeks out the help of a peculiar detective - the most elementary choice, of course - and uncovers a clandestine society hellbent on solving the riddle of death.

Goss weaves her story with a nifty blend of prose and in-set dialogue, imbuing each of her curious characters with colourful vitality. Don't miss this fun, creative take on classic sci-fi horror!