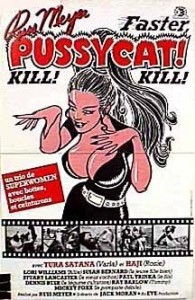 For the August Movie Club selection we reach back to 1965 for this big-bosomed blockbuster. As the film’s original press release boasts, “FASTER PUSSYCAT, KILL! KILL! is the story of a new breed of SUPERWOMEN emerging out of the ruthlessness of our times. We are introduced to three BUXOM Go-Go girls: VARLA, ROSIE, and BILLIE, wildly dancing the Watusi before the leers, jeers and lecherous come-ons of their drooling all-male audience. The violence, implicit in the girls’ tease, is quickly moved out of the microcosmic bar into the outside world as they literally let go of themselves, embarking on a wild, violent, deadly journey of vengeance on all men.” For those brave enough, All Seats $5.00.