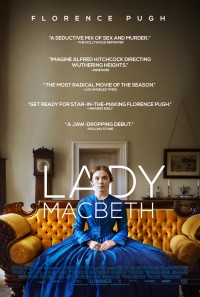 While there are obvious influences from the Bard, the film is adapted from the Russian novel Lady Macbeth of the Mtsensk District by Nikolai Leskov and it trumpets the arrival of the young British actress Florence Pugh in the title role. Given into an arranged marriage to a much older man, Lady M lands in an austere household of dour, socially controlling males who promptly leave her alone to pursue business elsewhere. Her interest in one of the stable hands quickly turns into a torrid sexual affair, upsetting the staid household, and unleashing a cascade of reckless behaviour, which ultimately leads to a tragedy of Shakespearean proportions. “Feels like Victorian noir...smart, sexy and dour. A lethally charismatic performance from Florence Pugh.” - Peter Bradshaw, The Guardian. Recommended.