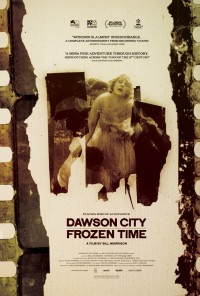 “Dawson City was established in 1896 with the advent of the Klondike Gold Rush and the town became the end of the road for silent film prints during the 1910s and 1920s. Its remote location made shipping them back to the United States prohibitively expensive, and thousands of films were lost or dumped into the Yukon River. Inspired by the discovery of a long-buried stash of hundreds of silent films in the titular Yukon Territory town, Morrison uses much of that footage as the basis for a film that encompasses many themes. He tells the story of the films’ discovery and preservation, and also addresses the history of film itself and the story of the town that fell on hard times once the Gold Rush petered out. Whether it features long-forgotten performers, or silent screen stars like Charlie Chaplin, Fatty Arbuckle, and William Desmond Taylor, or fascinating historical figures and events such as the infamously fixed 1919 World Series, the rescued footage proves consistently fascinating. Dawson City: Frozen Time represents a captivating time capsule that delivers a poignant paean to a long-gone cinematic era.”­—Frank Scheck, Hollywood Reporter