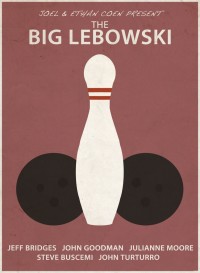 LEBOWSKI AND THE ORDER OF IRISH MONKS

Who could have foreseen that a massive movie cult would be born when this Coen Brothers film was released to befuddled audiences on March 6, 1998? We’re celebrating the 20th anniversary with Walter, Donnie, Maude, Jesus and the Dude. We just need you to really tie the room together.

As longtime Guelph Movie Club (GMC - no membership required) impresario Danny Williamson prepares to fade into fatherhood, we reach back to invite Walter, Donny, and the Dude back to the Bookshelf. Join the Jesus, the Nihilists and, of course, Bunny Lebowski as we return to the scene of the stolen rug that really tied... We’ll be serving White Russians in the recently licensed (AGCO) cinema and as Junior Achievers we’ll be exploring the future of GMC programming. Lebowski-themed apparel is most welcome and prizes await.