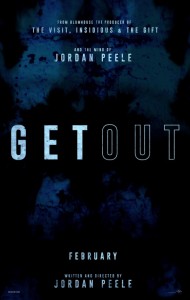 This directorial debut from one of America’s funniest comedians uses social satire to expose the racist underbelly of privileged white America while slipping into the entertaining scare tactics of the contemporary horror film. Confused? Yep. Scared? Not yet. Wanna see this? You bet! But let’s let three heavyweights of American film criticism weigh in with a few words from their rave reviews. “Blending race-savvy satire with horror to especially potent effect, this bombshell social critique from first-time director Jordan Peele proves positively fearless - which is not at all the same thing as scareless.”—Variety “When the film moves out of the paranoiac realm and into action, the violence is deeply satisfying, the twists delightful.”—Hollywood Reporter “Get Out is fully surprising in both concept and craft, with the scares never coming just when you expect them and the secrets more audacious than you might be guessing.”—Village Voice. Be warned, like life and politics in America today, there will be racism, violence, and gory horror scenes. But unlike life and politics in America today, it will be smart and funny. Recommended—but you have been warned.