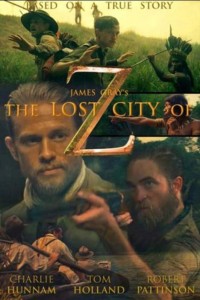 The Lost City of Z

This film is based on David Grann’s book about the British explorer Col Percival Fawcett, who in the early years of the 20th Century found signs of what he believed to be highly advanced civilizations in the Amazon jungle. Undeterred by racist naysayers back home who refused to believe the values of native cultures, Fawcett continued to explore the Amazon until his disappearance in 1925. Charlie Hunnam, Sienna Miller and Tom Holland star in this thoughtful new adventure film with ideas, a far cry from the American jingoism of Indiana Jones. “The grandeur of this movie is off the charts. For a certain kind of old-school film fan, someone who believes in shapely, classical proportions and an epic yarn told over time, it will be the revelation of the year.”—Joshua Rothkopf, Time Out New York. Most Highly Recommended for fans of such fare.