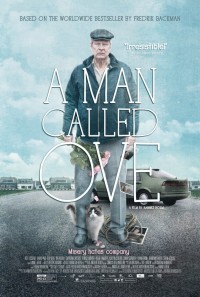 “A touching comic crowd-pleaser that may call for a tissue or two by the end, A Man Called Ove is an irresistible adaptation of Fredrik Backman’s bestselling novel. It’s a heartwarming tale about a stubborn, short-tempered man with steadfast beliefs, strict routines and the feeling that everyone around him is an idiot. Upon first encounter, Ove comes off as one of those annoying, nosy souls found everywhere in the world, the ones who assiduously obey all written instructions and tell you to do so, too. Ove is privately mourning the recent death of his adored wife, Sonja and intends to join her in the cemetery as soon as possible. One of the film’s running jokes is that he’s simply crap at offing himself. Ultimately, it’s a friendship with the new neighbours – practical, pregnant Parvaneh, her young daughters, and her hopelessly unhandy husband Patrik, who never has the correct tools – that gives Ove a new lease on life.” - Alissa Simon, Variety. In Swedish and some Persian, with subtitles. Highly Recommended.