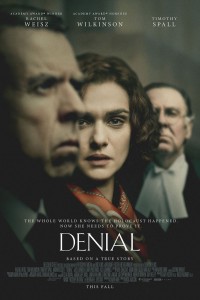 Sunday Morning Movies and Talk at the Bookshelf

David Irving was a military historian, who in the 1990s, fell under the sway of theorists who considered the Holocaust as a hoax. In 1993, Deborah E Lipstadt penned a book, in which she named Irving a Holocaust denier, and he promptly sued for defamation. British libel law put the burden of proof on Ms Lipstadt. With a script by award-winning British playwright and screenwriter (The Reader, The Hours) David Hare, and impeccable performances from Rachel Weisz, Timothy Spall and Tom Wilkinson, Denial is an intelligent and intense courtroom drama that addresses the specific elements of this case but also examines one of the most important historical events of the 20th Century. Highly Recommended.