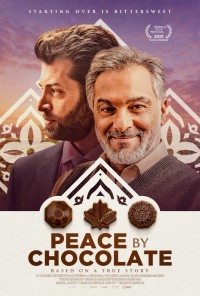 "Arriving on Canadian screens with a hat-trick of audience awards from film festivals as far-flung as Nevada, Naples and Indianapolis, Peace By Chocolate is a bona fide crowd pleaser, and a true story to boot.

"The first feature from director and co-writer Jonathan Keijser tells the story of the Hadhad family, whose chocolate factory in Damascus was destroyed by the civil war in Syria in 2012. Three years later they arrived as refugees in Antigonish, N.S., where patriarch Issam (Hatem Ali) was determined to start anew. This doesn’t sit well with the man’s son, Tareq (Ayham Abou Ammar), who dreams of becoming a doctor. But incomplete transcripts make it difficult for him to integrate into Canada’s medical system. And besides, as the only family member fluent in English (and a quick study of East-Coast-ese too), he’s needed to help his father navigate in his new home.

"It’s a heartwarming story with a Come From Away vibe, and while it doesn’t shy away from the racism immigrants experience in Canada, the predominant mood is one of triumph over adversity. And there’s a fun running gag in which fellow Syrians try to speak to Tareq in Arabic, only to find their mother tongue has gotten rusty. The feel-good movie lives or dies on the strength of its script and its acting, and there are many examples that stumble. Fortunately, Peace By Chocolate gets high marks in both categories. The results are sweet." - Chris Knight, National Post

In English and Arabic with some subtitles.