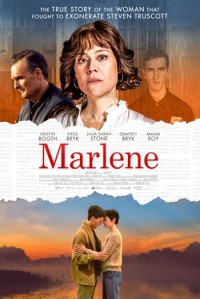 The Bookshelf Cinema is honoured to host the national theatrical premiere of Marlene.

"Many years ago, Steven Truscott and Lynne Harper were classmates in the small town of Clinton, Ont. Her body was discovered on June 11. The next day, Steven Truscott — believed to be the last person to have seen Lynne Harper alive — was arrested for her murder; Truscott was eventually found guilty and sentenced to die by hanging. He was 14 years old. The death sentence was commuted to life in prison, and after he had served 10 years, Truscott was released on parole. It would take nearly 50 years to clear his name and see him acquitted of the charges. Two women were crucial to that journey to justice. The first was Canadian writer Isabel LeBourdais, whose 1966 book, The Trial of Steven Truscott, detailed the errors in the police investigation and trial process and brought the attention of the whole world to the case. The second woman is Truscott’s wife, Marlene, who worked tirelessly for decades to prove her husband’s innocence. Marlene Truscott essentially moved heaven and earth to get her husband and her family out from under the shadow of wrongful conviction. She undertook the Herculean task of revisiting every detail of the case, for years poring over boxes of documents in search of new evidence that would clear Truscott’s name. And she did it. Marlene is a fascinating new film from director Wendy Hill-Tout that tells the story of the woman who devoted so much of her adult life to fighting for justice." - Liz Braun, Toronto Sun. Highly Recommended.