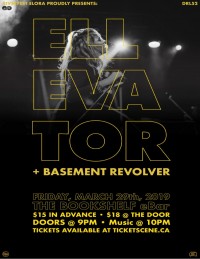 We're so excited to be bringing you these two wonderful bands as a part of our ongoing Dead Radio, Love music series!
Ellevator (Hamilton/Guelph)
Good music seems instantaneous: a decisive rush of expression and dopamine. Hamilton, Ontario's Ellevator captures that direct hit of immediacy, with a closer listen revealing the meticulous design of their muscular pop songs. Frontwoman Nabi Sue Bersche delivers raw lyricism with quiet power. Her nimble melodies anchor the electric hooks and cinematic timbres Ellevator has refined on countless stages. Their striking self-titled debut EP -- recorded in Hamilton with Michael Keire (Arkells, The Dirty Nil, Wildlife) -- was released in the Spring of 2018 by Arts & Crafts and supported by tour dates with Arkells, Dear Rouge, Matthew Good, Our Lady Peace, Banners, and Amber Run. Brick by brick, Ellevator has built a reputation as a band to watch.

Ellevator is Nabi Sue Bersche, Tyler Bersche, Mike Boyd, and Elliott Gwynne.
Basement Revolver (Hamilton)
Heavy Eyes is the debut album from Canadian indie-rock trio Basement Revolver. There’s an air of weariness pervading the album, with the sleepy title Heavy Eyes summing up a general exhaustion right down to the bone, as well as hinting at a heavier direction as they deftly merge 90s infused indie rock with fuzzy dreamy pop and poignant, yearning lyrics. Unable to disguise the emotion in her voice, songwriter Chrisy Hurn shares intimate stories and personal wounds from her past, revealing a deeply affecting and rewarding set of songs.

Bringing together the talents of Chrisy Hurn (vocals, guitar), Nimal Agalawatte (bass, synth) and Brandon Munro (drums), the band hail from Hamilton, Ontario and were named Basement Revolver due to Chrisy’s basement apartment, rather than any trigger happy leanings. Their ascent to the spotlight has been a steady trajectory, capitalising on the success of their debut single “Johnny” in 2016. The track garnered endorsements from DIY Magazine and Exclaim! as well as respected tastemakers Gold Flake Paint, who hailed it a “‘favourite song of the year” contender. They had stumbled across a sound that is capable of stripping listeners of inhibition, yet heavy hitting enough to leave a lasting impression.

On the back of “Johnny”, they were signed by Memphis Industries’ UK sub-label Fear Of Missing Out, who released their debut self-titled EP in 2016 with “Johnny” and their second single “Words” reaching the higher echelon of the Hype Machine chart and the EP flagged up in several end of year lists. They followed this up with the Agatha EP in 2017 where the single “Bread & Wine” reached the B-list on Radio BBC 6 Music and also garnered support from John Kennedy at Radio X. The band have racked up over one million plays on Spotify across the two EPs.