RT @MikeSchreiner: Great job @globalecochange on @TheAgenda this week talking about the delay of your book launch due to Covid-19. I l… t.co/loOlHrhDvM


RT @BeyondStayGold: Thanks @Bookshelfnews for sourcing delivering this #Supernatural read yesterday. Sometimes you have to have be pati… t.co/Fut95gXoDI


RT @KarynCFGW: Hey @MacDaddy2 - look what just came in for me from the @Bookshelfnews Excited to dig in! t.co/v78BkWbWd0 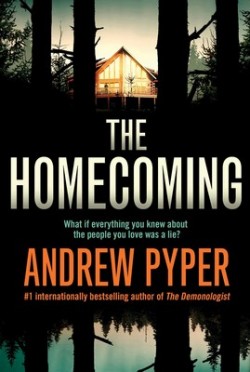 The Homecoming
Following the death of Raymond Quinlan, the surviving Quinlans--Aaron and Franny, in their mid-30s, teenaged Bridge, and their mother--are summoned to Raymond's mysterious, secluded estate, Belfountain, to discuss the will. A distant, secretive father, the family hopes that, if they were unable to access Raymond in life, maybe death will provide them with some purchase on the man and his legacy.
There's a catch, of course.
The will's caveat is so familiar and so imitated that you'd be hard-pressed to pinpoint which exact story it hails from: before Raymond's multimillion-dollar inheritance can be divided five ways, the family must stay on the grounds, without any contact with the outside world, for 30 days. Belfountain is a sprawling former-camp in the Pacific Northwest, a place that Raymond talked about, but which no one in the family other than Bridge has ever been invited. This proviso seems to be one last dick move from beyond the grave, but when others arrive at the gates of Belfountain, it becomes clear that Raymond has no shortage of familial deceptions up his sleeve.
Over twenty years and half that many novels, Andrew Pyper has been ratcheting up the creepiness and evilness with each new book. As such, it's initially somewhat funny and clumsy that Pyper would begin The Homecoming with such a recognizable trope. Because of course we all know the scenario of a dead relative and their vast fortune protected behind some sinister, otherworldly gauntlet.
But do we truly know the story? If Pyper is lifting, where exactly is he lifting from?
The set-up seems so familiar, yet there's no specific point of reference for it. There are bits of the story scattered over a trove of old sources, but the trope is ultimately a remembered amalgam of these. The scenario survives as a sort of mandala effect, an odd mix of déjà vu and jamais vu; you know story, but you don't know it. And it's this elusive, contradictory feeling that haunts the reader at the outset of The Homecoming that comes to haunt the Quinlans themselves. The more they delve into their father's life, as well as their own, the more the actual truth of their lives and this situation begin to fall out of focus.
In The Homecoming, Pyper uses familiarity as a way into strangeness, and comes out with his creepiest, most disorienting book yet.
Go To Page Turners & Pot Boilers