Code Your Own Games!: 20 Games to Create with Scratch

The fascinating story of four African-American women who were instrumental in NASA's first space launch - adapted for younger readers!

Rosie's projects include (but are not limited to) building a solar oven, constructing a catapult and solving real-world problems!!


RT @ShekillsLit: A great launch with a great crowd. Thanks to all for coming out on a cold night for a hot new read.… t.co/0rHrNmaWiP


Thanks for being here! Pick up your copy of #FailurewithoutFear available in the Bookshelf bookstore… t.co/tij4BSfa8Q

REVIEW: BOLDER: Making the Most of Our Longer Lives 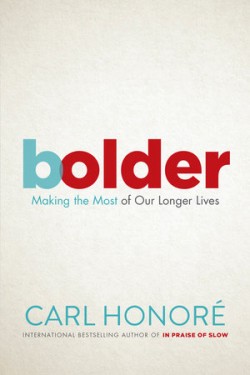 Bolder: Making the Most of Our Longer Lives
Be Bolder with Carl Honoré @ the eBar

I’m looking forward to talking with Carl Honoré when he comes to The Bookshelf on March 5. In 2004, he presaged the Slow Movement with In Praise of Slow, an international bestseller. His latest book, Bolder: Making the Most of Our Longer Lives, as it turns out, began with speed. At 48, Honoré scored an exciting winning goal for his hockey team in a semi-final game. The excitement was tainted, though, when he was listed as the oldest player in the whole league. Why did this upset him? Having looked in the mirror, and realizing what lay before him, he set out on a mission to learn how to age better.

Honoré is a guy who seems to have a lot of Ikigami - Japanese for a reason to get up in the morning. His enthusiastic study of aging now, and even way back then, kept my brain ignited and my pen scrawling in my notebook. In Chaucer's Canterbury Tales you’ll find this quote: “Age that comes to poison everything, has taken all my beauty, all my pith.” Have you ever felt like that? Or how about Aristophanes who said, “Bedding a post menopausal woman is like sleeping with death?” One wonders how he formed that opinion! Look no further for a present day ageist than Mark Zuckerberg, one of our world’s social architects, who said that “younger people are just smarter.” Wonder what will happen to him when he puts on a few years…?

Okay, so maybe our speed of computation does actually slow down as we age, but Honoré has so many examples of collaboration, grit and creativity that you won’t be so afraid when you come to inhabit your older self. Apparently, in older age there is "myelin sheath breakdown," but this doesn’t inhibit creativity because it loosens up neural architecture. The most lucrative patent applications come from people who are over 55, and a study at the University of Akron in Ohio revealed that people with a sense of humour lived 8 years longer than their crabby siblings!

There’s lots to look forward to, so come out on March 5 and soak up Carl’s wealth of experience, and perhaps give a few insights of your own! Tickets at the door - $6 for members & students, $8 regular.