Reclaiming Conversation: The Power of Talk in a Digital Age

With so much concern about the affects of digital technology on the young and even the old, this is a book that many will be interested in.

How Music Got Free: The End of an Industry, the Turn of the Century, and the Patient Zero of Piracy

Ever wonder what happened to the music business?

The Social Life of Ink: Culture Wonder And Our Relationship With The Written Word

Losing The Signal: The Spectacular Rise And Fall Of Blackberry

Journalists Jacquie McNish and Sean Silcox write the insider account of the way up and down of Canada's beloved company Research in Motion.

Mass Disruption: Thirty Years on the Front Lines of a Media Revolution

The author of Out of Poverty discusses what it is like for most journalists to be out of a job.

Bookshelf twitter
Follow @bookshelfnews
RT @KarynCFGW: Hey @MacDaddy2 - look what just came in for me from the @Bookshelfnews Excited to dig in! t.co/v78BkWbWd0


RT @MarcBellDept: Launched a Kickstarter today for a musical project I am part of: MARMALADE DUPLEX PLAY THE TUNA OLIVE VILLAGE. Plea… t.co/HSuT2GAVvg

YOU CAN'T GO WRONG WITH THESE NOVELS!

BARB - Normal People won last year's Man Booker and also was the bestselling book in Britain. It's all well deserved as she understands the zeitgeist of the young, no matter what age they grew up in!

The Boy, the Mole, the Fox and the Horse

From the revered British illustrator, a modern fable for all ages that explores life's universal lessons, featuring 100 color and black-and-white drawings."What do you want to be when you grow up?" asked the mole."Kind," said the boy."

Beautiful but dark. The language is biblical and captures and awakens you to the trials of living. A brother and sister are orphaned in an isolated cove on Newfoundland's northern coastline. Their home is a stretch of rocky shore governed by the feral ocean, by a relentless pendulum of abundance and murderous scarcity. Very powerful writing!

The Testaments: A Novel

Let's sing a hymn of praise to Margaret Atwood and all of the important work that she continues to do! Co-winner of the Mann Booker Prize this year!

An audacious, darkly glittering novel about art, fame and ambition set in the eerie days of civilization's collapse. Kind of flying off the shelf right now!

A Gentleman in Moscow: A Novel

What underpins this fantastic novel is scrupulous attention to detail!

The Dutch House: A Novel

Ann Patchett, the New York Times bestselling author of Commonwealth and State of Wonder, returns with her most powerful novel to date: a richly moving story that explores the indelible bond between two siblings, the house of their childhood, and a past that will not let them go.

REVIEW: YOU KNOW YOU WANT THIS 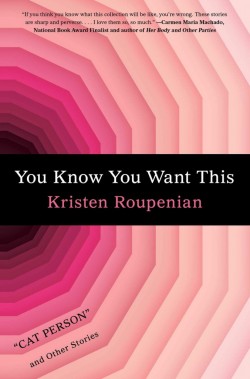 You Know You Want This:

There is no conflict--no drama--without desire. The first rule--maybe only worthwhile rule--of fiction is that every character must have an articulate want. Want is the engine that takes a character either puttering or careening out into the world to bumper-car with the conflicting desire of others, thus creating drama.

But in life, our wants are rarely so tailored to summation in a high school essay. The deeper down you go--way past the want for a glass of water, further than material or professional wants--the more fickle and contradictory our desires become. We have trouble saying what we want, or knowing what we want, or we say what we want even though it's not actually what we want.

Kristen Roupenian's "Cat Person" might be one of the most read short stories of all time. When it appeared in The New Yorker last year, the response was profound. The story of a fumbling, confused courtship that leads to venom landed in the thick of the MeToo hashtag, but its resonance with generations of women who've been called whores for not complying with the expectations of generations of men is, unfortunately, timeless.

Confession, discussion, and argumentation followed. Everyone saw something they could relate to in the story, bits of themselves or bits of their experience with others. Many women saw their own experience in the way Margot gradually finds herself trapped by Robert's attraction and expectation. Many men saw their own experiences in Robert's confusion with Margot's mixed signals. The story caught because it was so thoroughly relatable, but it kept burning for the same reason that Roupenian's collection, You Know You Want This, is such a compelling collection.

Better than any other writer I can think of, Roupenian documents the complicated strata of desire people are composed of. The things we want, the things we think, don't always square with the person we think we are, or the person we want to project for others. When people who aren't totally themselves interact with other people who aren't totally themselves, havoc ensues. People feel lied to, misunderstood, cheated, and--usually--angry and vengeful. We think we know what other people want, and we hold them to it.

Though "Cat Person" is deserving of its ubiquity, "The Good Guy" is the standout of You Know You Want This.

Ted--"pathetic Ted, shot nerdy Ted, ladykiller Ted"--is a good guy, the guy that women find after a life of being wronged by bad guys. We meet Ted in a scenario that somewhat turns the "Cat Person" tables. Angela--"way out of his league"--is across the table, crying, furious that things are not turning out how she wanted. "The problem, it seemed, was that while he'd told Angela from the beginning that he wasn't looking for anything serious, at the same time, confusingly, he'd also been nice."

Though Angela's furious, Ted explains that none of her anguish is his fault. "I've always been honest with you... Always. I told you what I wanted from this relationship from the very beginning. You could have trust me, but instead you decided you knew better than I did. When I said I wanted something casual, you lied and said you wanted the same thing, and then immediately you started doing everything you could to make it something else. When you didn't manage to make what we had into a serious relationship--the thing you wanted, and I didn't--you got hurt. I see that. But I am not the one who hurt you. You did this, not me. I'm just--just--the tool you're using to hurt yourself!"

His skull opened up and bleeding from the glass Angela throws at him, Ted has a chance to reflect on how he got to this point. What follows is perhaps the most astute assessment what has become known as The Good Guy, a guy who uses performative decency as a means of punishing women he feels ignored and wronged by.

"I didn't mean to hurt anyone," Ted confesses to no one from his gurney in the emergency. "I just wanted to be seen, and loved for who I am. The problem was, it was all a misunderstanding.I pretended to be a good person, and then I couldn't stop... There's a bad Ted underneath the good Ted, yes, but then, under that, there's a Ted who's good for real. But no one ever sees him; his whole life, no one ever has."

You Know You Want This is a remarkable collection, each story a sort of litmus test for how a reader sees themselves and how they see others. The complications of our desires are so well rendered that you'll feel yourself both exposed and validated, cast as a hero or cast as a villain, or both at once.