Finally available, get yours now as quantities in North America have been limited. A riveting, deeply personal account of history in the making-from the president who inspired us to believe in the power of democracy.

If I Knew Then: Finding wisdom in failure and power in aging

It could be said that Jann Arden is a renaissance woman. She has so many outlets for her creative intelligence. But she says the most important thing in her life has been her failures!

The highly anticipated sequel to the beloved worldwide bestseller Ready Player One, the "ridiculously fun and large-hearted" (NPR) near-future adventure that inspired the blockbuster Steven Spielberg film. One of Steph's Fresh Air picks.

The collection of a lifetime from the bestselling novelist and poet. By turns moving, playful and wise, the poems gathered in Dearly are about absences and endings, ageing and retrospection, but also about gifts and renewals.

Bookshelf twitter
Follow @bookshelfnews
A history of The Bookshelf’s connection to the wide world of bookselling, publishing and the evolution of technolo… t.co/wmng23jEZg


RT @cibabooks: "As we start 2021 and look forward to the 20th edition of Canada Reads, we are reminded that books can be a safe pl… t.co/VjCsiKwjIQ


We have had a great time bringing The Canadian Independent Booksellers Association into being, working with several… t.co/SzJ9XSTyA6

REVIEW: TO ME YOU SEEM GIANT 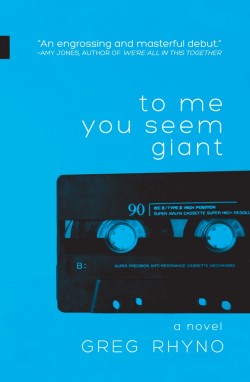 To Me You Seem Giant

At the risk of seeming overly snobby or nostalgic, I'm declaring that a true mix tape can only be on an actual tape.

Hang your CDs and your precious iTunes playlists. There's an inherent, essential teleology to the outdated (lately revived) format of the cassette tape that isn't present with newer media. Unless you want to bother too much with the rewind or fast forward buttons, with a tape you're stuck in the structure, direction, and intention of the compilation. With those digital formats, you can easily spoil the intended flow, skip around, go back and forward as you please, betraying the vision of the mix.

To Me You Seem Giant, local teach' Greg Rhyno's debut novel, opens fittingly with a teenaged Pete Curtis, in 1994, making a mix tape. The tape quits before the intended last track does, and Pete's got to adjust: either leave two minutes of dead air or shoehorn in a quicky Eric's Trip track. Side A finished, he sets the mix aside to go meet his friend and bandmate, Sodapop (Pete's the Ponyboy of these Outsiders), planning to complete the flip side later.

In the structure of the novel, that unfinished flip side is the rest of Pete's life. Split into Side A and Side B, To Me You Seem Giant flips between 1994, when Pete's rising in the ranks of the local Thunder Bay music scene, and 2004, when Pete's rising in the ranks of the same high school he boozed with Sodapop on the roof of in Side A, now a substitute holding out for an actual teaching gig. Rhyno sets up a sometimes punishing juxtaposition between the past and present here, having teenaged Pete live next to adult Pete like this, inviting constant comparisons between all the things he could have become with what he did become or is becoming.

Even under the best of circumstances, imagining what your teenaged self would think of your grown self is usually a dangerous thought experiment. At the same time, looking up -- as an adult -- to the teeny know-nothing you once were is just as unproductive. In To Me You Seem Giant, Rhyno strikes a fine balance between the aspirations of youth and the considerations and concessions of adulthood. When you're young, your life could go anywhere and you could be anything. Older, the surprises are fewer -- when they come, they tend to come from without instead of within. Each choice you make locks you into a path.

The mix tape is a tricky organizational trope for To Me You Seem Giant. As an image, it would seem to be a fetish object for Pete's youth. But youth itself is too pell-mell to be described by a curated collection like a mix tape. Youth is more a randomized smattering of other people's idea of good music, with a bit of your own always-changing taste peppered in there -- a kind of community iTunes library on shuffle. Teenaged Pete making a mix in his bedroom is playing at adulthood, exerting control over the randomness, editing the choose your own adventureness of youth into a personalized, meaningful flow.

While there's enough CanRock 90sness to keep current oldtimers nodding "Yes, yes, yes..." throughout, To Me You Seem Giant never stumbles into its own nostalgia traps. For a novel that's a lot of fun, Rhyno's book is ultimately kind of uncool. Uncool in a good way, though. In the end, it's a love song to adulthood, about the journey from disorder to order, an acknowledgement that you can leave behind a lot of the bad of your youth and still bring all the good music with you.