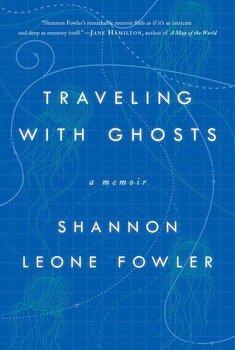 Traveling with Ghosts: A Memoir

The ocean is a dangerous place, which is why I am an armchair adventurer. Hurricanes in the Southern Ocean, sharks beneath the sea’s surface, and countless shipwrecks are just a few of the excitements I would rather read about than experience. Thus from the safety of my sofa I settled down to read a book that features the ocean, Traveling With Ghosts by Shannon Leone Fowler, only to discover that this risk-taking adventurer and Marine Biologist’s financé, Sean, is stung by a venomous box jellyfish while they were swimming in Ko Phan Ngan, Thailand, dying instantly. And this was only two pages in.

My immediate thought after this: can Fowler hold my interest for the rest of the book? Can a five-minute death stretch to 300 pages?

The answer is, yes.

First of all, the book does not follow a straight timeline, but instead bounces around captivatingly in time and place. In short chapters, we go back and forth from the shocking seconds, minutes and days surrounding the horrific death of Sean, to the couple’s heady days of courtship in Morocco, Portugal, China and Australia, and then to the grief-stricken days as she stumbles around the bleak winter landscape of Eastern Europe.

This is my nightmare; a completely irrational tragedy in a foreign country. Yet there are people who come to Fowler’s aid, in particular two exceptionally kind Israeli women who give up their holiday to help and do not leave her side. After the event, Fowler encounters both friendly folk and scary ones and it seemed that the book was going to be easily divided into light and dark; everything before Sean died would be light, everything after his death, especially Eastern Europe, would be dark. However, that was not always the case. As she flees her pain, Fowler finds unexpected strength, courage and even joy, in countries that are struggling to recover from the overwhelming devastation of war, such as Bosnia and Herzegovina, and Croatia.

By the way, Fowler is not only a proficient travel writer, she is also a skilled food writer. Countless times I found myself longing to be where she was travelling, and eating what she was eating.

It is interesting to note that during the time she wrote this memoir, a number of people met the same fate as Sean, while innocently swimming on the beach at Haad Rin Nok. There had been warnings posted, but the resort owners had them removed for fear of scaring away tourists. Fowler dedicates this book to those unfortunate dead.