The far side of the Moon, 1973. Three astronauts are trapped in a tiny Apollo module, and one of them has murder on the mind . . .
October 26 @ 8 p.m. Check out indieevents.ca! Great New York Times review Oct 15! 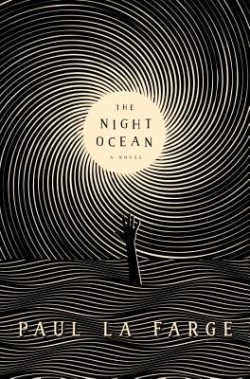 The Night Ocean
The Ballad of Black Tom
Lovecraft Country: A Novel
Children of Lovecraft

There probably aren’t any real monsters. Beyond the historical misidentification of some animal bones and narwhal horns, monsters are just expressions of those thoughts, feelings, and actions of ours that feel so aberrant that we have to excise and exaggerate their qualities in order to make any sense of or peace with them.

In a 20th century that saw the declawing and defanging of antiquity’s monsters by Hollywood, weird fiction author H.P. Lovecraft supplied ancient, eldritch, indescribable horrors that were the perfect companions to the hard-to-digest horror of the First World War and seemed to presage – Lovecraft died in 1937 – the inhumane, but also essentially human atrocities of the Second World War.

In Lovecraft’s universe, humans are essentially insignificant in the context of the grand old cosmic horrors that rule just beyond our ken. Though not well regarded in his own lifetime, Lovecraft and his universe went on to become one of the most looming influences on writers of horror, his specific worldview still being one that contemporary authors inhabit and expand. The recent anthology Children of Lovecraft, for instance, makes for a fun survey of this ongoing occupation.

The intersection of Lovecraft’s writing and his biography, however, makes his universe a fraught and complicated one to inhabit. By now it’s taken somewhat for granted that Lovecraft’s beloved conception of cosmic horror was seeded by the author’s own racism and xenophobia, that his influential pantheon of monsters were seemingly expressions of his own ugly insides. Increasingly, with books like Matt Ruff’s Lovecraft Country and Victor LaValle’s The Ballad of Black Tom, the real world, mirco implications of Lovecraft’s macro cruelties are being met head on. Paul La Farge’s The Night Ocean, however, is one of the few instances (maybe the first instance) where Lovecraft, warts and all, appears as a character.

The biographical axis of La Farge’s novel is the relationship between Lovecraft and Robert Barlow, the young fan who would go on to be largely responsible for cultivating the author’s posthumous legacy. Initially pen pals, the notoriously reclusive Lovecraft accepted an invitation to visit Barlow in Florida – the author was then 44, his admirer 16. Imagining that relationship – Lovecraft’s sexuality was also somewhat mindboggling – as well as imagining the imaginings of that relationship is the business of The Night Ocean, which presents the answers, or would seem to, in a lost Lovecraft diary, The Erotonomicon. (Not to be confused with The Necronomicon.)

The Night Ocean will prove, by turns, both engaging and disappointing for Lovecraft devotees. (Those protective, disapproving fans will also find themselves as characters in the novel, too.) The prologue drops us into in a classic Lovecraftian scenario: our narrator’s husband, Charlie Willet, recently committed (willfully) to an asylum, has escaped and appears to have disappeared, naked, into Agawam Lake. The cause of Charlie’s unraveling would seem to be connected to The Erotonomicon and Robert Barlow, and the amorphous veracity of both. But as our narrator, the psychologist Marina Willet, explores the curious events and manuscripts that led to her husband committing himself, it becomes clear that La Farge – an underappreciated author of metafiction – hasn’t exactly set his novel as literally and egregiously in “Lovecraft country” as other fans/authors. The Night Ocean isn’t so much influenced by Lovecraft as it’s marinated in him.

Instead of summoning the monsters occupying the far off without, La Farge – so deftly marrying fact, fiction, and all that fecund uncertainty in between – conjures those within. The inarguable facts of Barlow’s life – as an adult he became an accomplished poet and revolutionary anthropologist who committed suicide under threat of his students exposing his homosexuality – mixed with the founded, assumed, apocryphal, and spurious details of Lovecraft’s life, all of which is set against Marina’s drive to understand what happened to Charlie, makes for a story concerned with how love produces a quixotic drive to understand and reconcile all the difficult, troubling – sometimes horrifying – components of a person. In La Farge’s exquisite ideation, we’re all of us, like The Erotonomicon, manuscripts of uncertain composition and origin.

I’m lately finding it impossible to shut out our current political fracas of seemingly unrelated things, so of course The Night Ocean seems especially relevant in a time when the extreme sides of the political spectrum are making monsters out of their opposites. Depending on which side you talk to, the world is either full of Nazis or full of Social Justice Warriors, each accused of being monomaniacally hell-bent on foisting their destructive agenda on the world. The vilification of each side makes no room for nuance, deals only in the binaries of right/wrong and good/evil. Maybe culture’s increasingly secularity makes supernatural monster making difficult, so we inflate and distort each other, a thought that kept cropping up during The Night Ocean.

Lovecraft could not exist today, would be deemed unredeemably vile. Yet, for all his bared flaws as a human, he’s still widely read and pervasively influential, his nastiness either overlook entirely, or always struggled with. The Night Ocean too struggles with Lovecraft, in its layers of perspective (the description of which would – sorry – spoil the book to describe) it tries to either reinvent or reconcile the facts and ideas of his difficult insides. It’s not quite this sticktoitiveness, though, that makes La Farge’s novel so compelling. On the surface, the interiority of The Night Ocean might alienate those Lovecraft fans who are drawn to that author’s populating the without with monsters. But once the full scale of the story is comprehended, the reader will hopefully see that that inwardness is just a different route to the inky, vast chaos beyond that, while tangible, is – very much in the tradition of Lovecraft – excruciatingly out of the realm of description.