Review: Small Planes and the Dead Fathers of Lovers 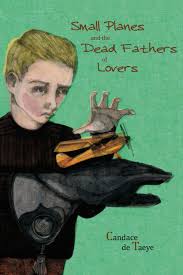 Small Planes and the Dead Fathers of Lovers

Satellites, digital imaging and the internet have made possible a journey once only available to the imagination. Taking as a starting point a personally significant landmark—a childhood home, say, or the main street in your hometown—and digitally telescoping that perspective slowly outward until it encompasses the entire surface of the planet, gives one a stronger sense of our place in the larger geography of the earth than has ever been possible before. While technologies like Google Maps have made commonplace these shifts of visual and geographic scale, such vistas fail to illuminate the dense networks of connections and disparities that simultaneously cut across and bind together the surface that satellite imagery presents. “Small Planes and the Dead Fathers of Lovers,” the titular opening movement of Candace de Taeye’s forthcoming book of poetry, works to delineate these connections, in all their emotional, cultural, and economic registers.

Small Planes and the Dead Fathers of Lovers is de Taeye’s second volume of poetry, following Roe, published in 2014 by Publication Studio Guelph. Published by local imprint Vocamus Press, Small Planes consists of three sets of poems: two longer projects, “Small Planes” and “I, House” (accompanied by “For Sale – An Addendum”) with a shorter sequence, “Blue Collar, Red Hood,” wedged between them. All three projects meditate on what it means to occupy a place—whether that place is geographic, socioeconomic, or domestic—and emphasize the centrality of bodily work to that sense of placed-ness.

"Planes” opens with the image of a local character: “this old man dapper despite his body / odor, worn mink cap, offered me a flight // small yellow Cessna” (3). The flight in question offers the poet a newly distant perspective on her hometown, and provides an image that structures the rest of the series. The poems give the sense of a map with slowly expanding edges, populated by illuminated points of heightened personal significance. From the new perspective that the pilot’s “small yellow Cessna” affords, the poet’s hometown threatens to “tessellate” outward across the landscape (3). This movement acts as a model for the rest of the sequence: each poem strikes a perspectival balance between an island and a flight that allows the poet to question her connection to the often disparate and unfamiliar places that the poetry assembles. The emphasis on blue collar labour in the opening few poems lays down a context in which the bodies that populate these places might connect.

Each poem in the sequence takes the shape of long lines arranged in five uniform couplets. Though not difficult—with all the ideological baggage poetic difficulty trails behind it—the poems are tough. Knotty and well-constructed, their accessibility does not foreclose dense linguistic play. The slippery and gnarled sonority of the opening lines of “Newfoundland” serve as a paradigmatic example of this tension: “visiting another mother our skirt anchored by skipping / stones watching wary lambs graze under big bad wolf winds” (10). Though the loping tangle of rhymes and off-rhymes, alliteration and cacophony fires up the auditory sense, the more easily followed than spoken narrative offers a crucial anchor for the reader, without sacrificing its complexity.

If “Planes” works by radiating outward from the familiar—a small rural town—to explore the world beyond it, the closing set of poems, composed of the sequences “I, House” and “For Sale – An Addendum,” works to unveil the expansive world within the four walls of a home. More visually experimental, these poems offer an account of how our living spaces inhabit us as much as we inhabit them, partially delivered from the perspective of the house itself. In the opening poem, “home is where the,” de Taeye twists the terms of a clichéd phrase, recognizing that
no,
home is the
heart,
within it we are reoxygenated
recirculated to distant capillaries
(Tofino, Reykjavik, Bangkok) spent
and return exhausted

it outlives us
we die curled up within it

The movement in this passage between the personal and the scientific is typical of de Taeye’s poetry, and helps to locate the poem in her on-going body of work. When in “hepatic,” a poem midway through “For Sale,” the speaker modifies this equation—“maybe not so much a heart / as a liver? I’ll filter accumulation / of your excess habits imbibing / fatty secrets and night caps” (64)—the slipperiness of the metaphors helps to remind the reader that our bodies and the places we call our own are never quite what we think they are, always modifying and rearranging themselves ahead of our ability to perceive these shifts. Belatedly then, we realize how hard it is “to be less of” who we think we are (70).

In between these two larger mediations, de Taeye sneaks a shorter and slyly punning take on a classic fairy tale, “Blue Collar, Red Hood.” Acting a sort of palate cleanser between the two longer works, “Blue Collar” weaves the story of Little Red Riding Hood together with some of the organizing themes of the book as a whole, and de Taeye’s wider oeuvre—food, aging, labour, and motherhood—in six brisk pages of short couplets. The important thing to note about the cluster of concerns cited here is the firm grasp of the bodily and the material that they foreground. The poems gathered in this volume perform muscular feats of language while grounding themselves in the gritty, corporeal world of experience. In “Farm hands,” one of the opening poems of “Small Planes,” “July’s tar is hot sap that absorbs readily at the wrist” (4). The image is both sickly and sweet, imbued with the sweet viscosity of syrup or motor oil—and immediate to the reader. The poem continues with its description tobacco cultivation: “snapping the flowers off, they call it topping. here we grow / in-dependence, cultivate work ethic, nicotine calm” (4). Small Planes and the Dead Fathers of Lovers inhabits this zone; de Taeye pulls together the visceral imagery of the bodily world and the communal sphere of shared lives and livelihoods. These poems work.