The Lying Life of Adults

A powerful new novel set in a divided Naples by Elena Ferrante, the beloved best-selling author of My Brilliant Friend. Giovanna's pretty face has changed: it's turning into the face of an ugly, spiteful adolescent.

Songs for the End of the World

"In these dark days, Saleema Nawaz dares to write of hope. Songs for the End of the World< is a loving, vivid, tenderly felt novel about men, women, and a possible apocalypse. I couldn't put it down." -- Sean Michaels

Inspired by a handful of old postcards sent by Uncle Leroy nearly a hundred years earlier, Bird and Mimi attempt to trace Mimi's long-lost uncle and the family medicine bundle he took with him to Europe.

Sacco's measured artwork lets the Dene people speak for themselves, working in tandem with the historical and sociopolitical context that he deftly interweaves.

Caste: The Origins of Our Discontents


RT @cbcfreshair: Up next...need some good reads for the summer? Mary Ito speaks to Shelley Macbeth of @BlueHeronBooks in #Uxbridge a… t.co/zezr8XQwwa


RT @craignorriscbc: Looking for a good book to curl up with this long weekend? At 820 @CBCKW891, we speak with @StephMinett, Co-Owner o… t.co/9J2Uo5Ii0X

Sunday Morning Movies and Talk at the Bookshelf 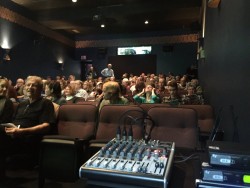 I hear we are in for another long, cold, Guelph winter, which means another season of hunkering down around town and doing around-town things. But what can I do that is different? What is exciting enough to get me off the couch and out of the house?

I already took care of that by joining the Bookshelf Cinema’s “Sunday Morning Movies and Talk at the Bookshelf”, a delightful and thought-provoking event where once a month we are shown a carefully chosen, surprise film followed by a panel with Q&A chaired by CBC Radio’s own movie reviewer, Karen Gordon. And that is not all. Before the film we are treated to fresh pastries by Guelph’s iconic Eric the Baker, accompanied by long-time favourite, Planet Bean coffee.

Film #1, last Sunday, was Denial starring Rachel Weisz, Tom Wilkinson, and Timothy Spall. Ticket holders gathered at 9:30 to socialize over hot baked goods and coffee and then watched the film, introduced by cinema manager, Peter Henderson. Denial premiered in September at TIFF 2016 and impressed Gordon enough to choose it as our first film. And what a great film to start with! Denial tells the true story of Deborah E. Lipstadt’s court battle against Holocaust denier David Irving. Tried in England, the legal team had to prove that the Holocaust happened in order to win. The intelligent cast was skillfully directed by Mick Jackson, the well-constructed script penned by notable stage and screenwriter David Hare. The action takes place in very few locations and because of the incendiary subject matter, is absolutely riveting from start to finish.

Sitting on the panel with Karen Gordon were Patrick Case and David MacDonald, two University of Guelph professors. Both profs careers cover a wide-range of politically-related studies, but Case’s background in human rights and MacDonald’s writings on the Holocaust and genocide made them interesting panelists. The event was was well-chaired by Gordon, whose radio voice I could listen to forever!

Time seemed to fly by and suddenly the event was over, but happily I still have six more surprise films and plenty of tasty treats and hot coffee to see me through the winter!