Bookshelf twitter
Follow @bookshelfnews
RT @cibabooks: As if there weren’t enough reasons to #ShopLocal, here is one more: our #CIBD2021 Contest for Book Lovers! Ever dre… t.co/0YUVShFXip


RT @cibabooks: Was there ever a better time to #ShowTheLove to indie bookstores? 🧡 Thank you to everyone who sent in their love no… t.co/wLVW19fCJ2

Review: The Hidden Life of Trees 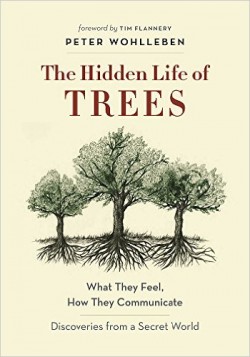 The Hidden Life of Trees: What They Feel, How They Communicate-Discoveries from A Secret World

Recent articles have declared The Hidden Life of Trees a European bestseller which, in my experience, suggests that its research is likely further ahead than current thinking in North America.  Canada’s Greystone Book, with its usual insight and dedication to books on the environment, has bought the rights to publish Hidden Life in Canada in September.

Assertions made in this fascinating book suggest that trees have a dependable way of communicating many complex issues, a suggestion some readers may perceive as flaky.  However, one German literary critic praised the humble narrative and celebrated the writer’s ability to break down a few boundaries people have about how the biological world may actually work.  Author Peter Wohlleben has managed state forests in Germany since 1987, and began to adopt alternative approaches after visiting private forests and finding that “they treated their forest much more lovingly, and the wood they produced was more valuable.” He stepped off of the traditional path of biological thinking and found that the more he researched, the more amazing the data. He now runs an environmentally friendly woodland in Germany where he is working for the return of primeval forests.

Wohlleben gives us countless examples of how roots are the most important part of a tree, and demonstrates how trees learn and work in community. Of course this could qualify as anthropomorphizing, but the theory is hard to refute when he backs up his wondrous examples with scientific data.  The wood-wide web pervades our forests: "Over centuries, a single fungus can cover many square miles and network an entire forest. The fungal connections transmit signals from one tree to the next, helping trees exchange news about insects, drought and other dangers.”  You will be shaking your head with wonder throughout the entire book.

When we started our bookstore back in the 1970’s, one of our most popular titles was The Findhorn Garden. Perhaps some of you remember it: a bunch of hippies in Scotland grew gargantuan cabbages and other fantastic flora. Of course, at the time, people kind of laughed because, it was, after all, just a bunch of drop-outs doing their thing. Laugh no longer! Wohlleben's book is backed up with lots of difficult-to-discount research. Perhaps The Hidden Life of Trees will at last succeed in convincing people that facts and wonder can exist in a forest together!